In her “Horizons” series, Ganna Kryvolap translates the essence of the cities of Berlin, Munich, Vienna, Kiev and New York into a very expressionist, abstract language. As a result of the geometric shapes that she uses, it is often not immediately obvious that the representations show cities, thus ensuring that the experience is exciting for the viewer and triggers curiosity. She invites us to examine the works more closely and grapple with them intensively.  With the aid of brilliant colours, the artist generates vitality and a positive atmosphere which communicate themselves to the viewer. 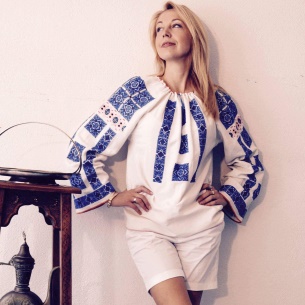 Since she was a young child, the Ukrainian painter Ganna Kryvolap has been shaped by the creative environment revolving around her family. She comes from a family of artists. Her father Anatoliy Kryvolap, who was famous for his Ukrainian landscape paintings, as well as her mother Zinayida Vasina, also an artist and theatre costume designer, both had a great impact on Ganna Kryvolap.

Ganna Kryvolap attended the National School of Art from 1989 until 1995. The teachers there also influenced the work of the artist. Lez Prezvant, Zoya Lerman and Oleg Zhyvotkov not only imparted specialised academic knowledge to her, they also enlarged her overall view of art. She subsequently studied at the National Academy of Art and Architecture from 1995 to 2001. She has already presented her work in over 20 solo exhibitions in the Ukraine, Austria and Georgia. Furthermore, she has also participated in a large number of international exhibitions, such as at Galerie Artodrome, in Berlin, Germany, in 2009, in Turkey, Bosnia and Herzegovina, the U.S.A and many other countries.  In the year 2013 she finished in first place at the Triennale in Kiev. In addition, she is a member of the Ukrainian Union of Artists and the German Art Association “SyrlinKunstverein”.

Her works are characterised by brilliant colours, expressionist structure and vibrating energy. They radiate lightness and an incredible luminous intensity. The artist works in series and cycles. She transforms her city series into an abstract and dreamlike language: Kryvolap’s pictures are hybrids that incorporate impressions of real landscapes, intellectual observations and pure fantasy. She contrasts her multi-coloured urban pictures with a colour background that additionally introduces a strong dynamic element.

In her “Ribbons” series, the artist makes use of silk ribbons. She has them float across her oil paintings, which serve as an abstract, coloured background. In Ukrainian culture, coloured silk ribbons are not only a traditional decorative element in women’s clothing or for festive rituals – the significance of the silk ribbon is much more profound. The silk ribbon is a poetic symbol that has accumulated increasingly more content and meaning over the course of time. For example, it may stand for the love and fidelity of a woman or serve as a symbol of the bond linking a couple. In this way, she injects Ukrainian tradition into contemporary art.